The Heston model commonly stands out among the stochastic volatility models for several reasons.

1) It provides a closed-form solution for European Call options.

2) It allows the stock price to follow a non log-Normal probability distribution.

3) It expresses the volatility as a mean-reverting process and fits pretty well the implied volatility surface of option prices observed in the market.

4) It takes into account a possible correlation between the stock price and its volatility. 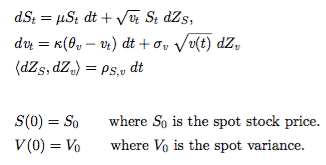 The first stochastic differential equation (SDE) expresses the fact that the stock price follows a stochastic process with a constant rate of return, μ.

The presence of the square root in the diffusion coefficient ensures the non-negativity of the variance. It is v(t) ≥ 0 for all time with probability one.

It can easily be observed from historical date that volatility changes over time. While volatility is undoubtedly varying over time, it seems to fluctuate around some long-term mean level. Consequently, the variance is represented by a square root mean-reverting process, similar to the one used by Cox, Ingersoll and Ross for modeling the term structure of interest rates in 1985.

κ is the speed of mean reversion of the variance process and can be thought as the degree of “volatility clustering”.

Effects on the different parameters on the IV

Intuitively, the speed of reversion, κ, governs the relative weights of the long-term mean level of the variance, θv, and the initial variance, V0. It is logical the impact of κ to be dependent on both the initial variance and the long-term mean reversion level. We consider the case in which V0 and θv are equivalent and provide a natural interpretation.

First of all, the impact of the mean reversion speed of the variance on option prices seems to be rather limited.

Then, the effect of κ appears to be different when options are deeply ITM or deeply OTM. This is very intuitive and is closely related to the fact that increasing the speed of the mean reversion of the variance decreases the probability of extreme movements. As a result, when an option is deeply OTM, increasing κ decreases the probability that the option will finish ITM at maturity, therefore decreasing its price. By the same way, when an option is deeply ITM, increasing κ increases the likelihood of the option finishing ITM, therefore increasing its price.

While the variance is never negative, it can actually reach zero except if the Feller (1951) condition is satisfied:

Intuitively, σv cannot be too large and κθv cannot be too small. In practice, this condition is regularly not satisfied so that the likelihood of a zero variance is somewhat important.

Empirical studies (Black (1976), Christie (1982) and Engle and Ng (1993)) have documented that the stock price and volatility processes are negatively correlated. Decreasing stock prices inflate the leverage firms have. It is commonly thought that this gives rise to more uncertainty and hence volatility. Those authors also showed that both the value and the sign of the correlation have an impact on the return distribution, more specifically on its skewness. A negative correlation makes the left tail fatter than the right tail. Such negative skewness is a typical feature of the distribution of returns.