Whilst we have shown that variance swaps are useful for taking a direct view on the future value of implied and realised variance, they can also be used to trade the shape of the variance term structure curve. One of the main uses of these types of trades is to express a directional view, but at a more advantageous level or with reduced carry.

First example: attempting to take advantage of a flattening of volatility term structure.

The market was implying a similar outlook for forward realised volatility in May 2006 as it had at the start of 2005.

This appeared to be somewhat contradictory given the macro economic concerns prevailing at the time.

Investors believe that these concerns may act to increase vol but want to avoid direct long exposure to realised var.

They could have used the recent flattening to enter into 1y, 1y forward VS.

While this fwd volatility was historically low --> still well above recent RV--> negative slide of 1.6% over the next year.

A long 1y -1y fwd variance position was only likely to be profitable if IV spikes or RV rises substantially over the next year.

Investors could still take advantage of the relatively low fwd volatility strike by recognising that the spread between 1y and 2y variance was low compared to the level of 1y variance.

By combining a variance calendar (long 2y, short 1y) with some additional long 1y variance (weighted as per the regression beta in Fig 83), investors could be long the curve whilst minimising outright IV exposure.

The beta of -0.2 suggested a trade ratio of long 1 unit of 2y variance and short 0.8 units of the 1y variance.

This would be equivalent to trading the spread between forward and spot variance, hedged for volatility directionality.

This position would have positive carry providing the market realises less than the 1y strike (around 16.4%).

The trade ratio will need adjustment through time as the position ages. 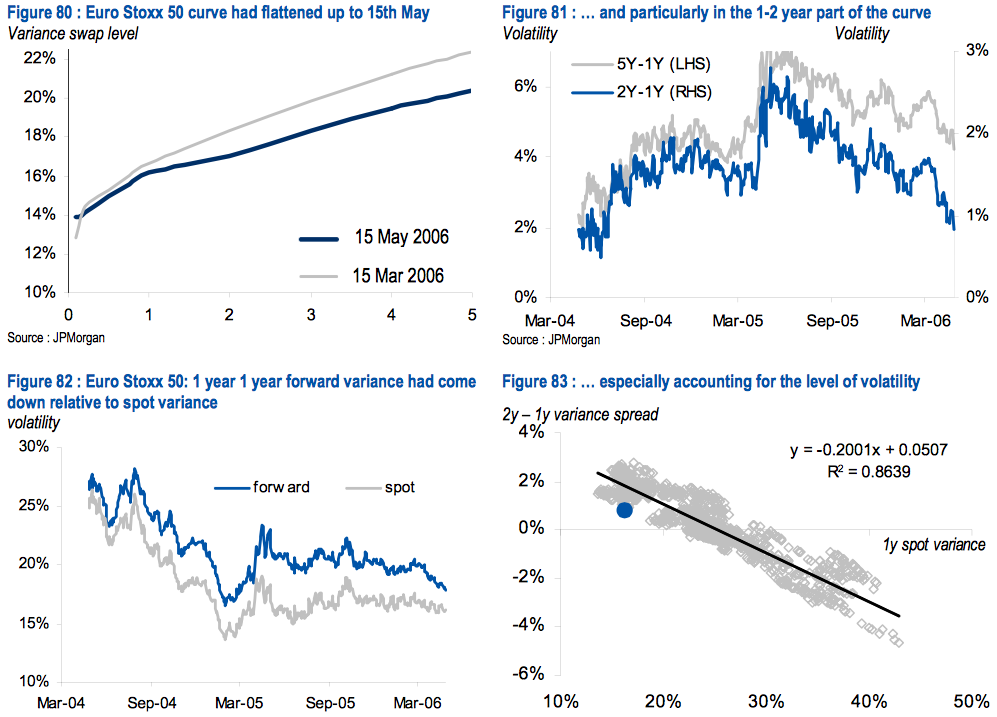 Steepness of the IV term structure between 1m and 9m VS --> compared to that of FTSE on same date.

This could have reflected anticipation of an increase in vol over the following months.

However, this slope appeared steep compared to the overall level of IV (Fig 85).

As the level of IV falls, the spread between the near term forwards and those further out usually widens.

However as the May-2006 vol spike was going back down this spread of forwards stayed narrow.

It reflects an expectation for a near-term move up in IV.

By assuming that the relationship between this spread and spot implied variance would hold, it can be seen that a spread which is long 6m variance 9m forward and short 6m variance 3m forward, is equivalent (at least according to a regression) to selling a spot 6m variance but at higher than prevailing levels.

Another way to think about a spread of forward variances is as a butterfly of spot variance swaps.

In total, this equates to a variance butterfly trade:

This example shows how butterflies can sometimes be used to trade variance at more attractive levels than spot.

This technique is often used in fixed income.