One of the strengths of variance swaps is the ease of pricing and constructing forwards.

Forward variance can be used to trade the future volatility of an underlying.

- before the forward date --> P&L entirely driven by changes in expectations of volatility --> mvmts in IV term structure.

- once forward date reached --> P&L is exposed to realised volatility.

Forward variance can be an attractive vehicle to be long volatility without accruing realised volatility losses.

Below we introduce the fixed income concepts of slide and carry as applied to volatility.

Carry is the cost of funding a spot position and reflects the difference between short and long term interest rates.

An investor wants to take a view the LT IRs will rise --> short sell a bond or short a long-dated swap.

The holder of a long VS position will have to pay the spread of IV over RV every day he holds the swap.

Since this spread is usually positive --> negative carry.

Slide occurs because once a trade is implemented the maturity is fixed, so that relative maturity diminishes over time.

Both spot and forward starting variance swaps have exposure to slide.

The behaviour of changes in the implied variance curve can be analysed using principal component analysis (PCA).

PCA decomposes moves in the volatility curve into its major components, or factors.

Figure 68 shows the two most important components of weekly changes in the SX5E volatility curve.

First factor illustrates how the dominant curve move is to increase/decrease much more at the short-end of the curve.

Short dated IV tends to move about twice as much as longer dated maturities during a shift in the term structure:

PCA analysis is useful in calculating expected gains/losses for different parts of the implied variance curve following a general increase/decrease in volatility.

In conjunction with carry and slide analysis, they can help identify the best part of the curve to be long/short volatility.

Below we use carry, slide and PCA analysis to help decide which long variance position (spot/forward, long/short-maturity) is likely to perform well as a hedge against a volatility spike. Factors to consider include:

Forecasting when a spike in volatility might occur is well nigh impossible.

However, by decomposing a long history of realised volatility into periodic components using Fourier transforms, one of higher weighted components of the transform suggests that there is a bias for a spike to occur about every six months.

If shift up in vol immediately -> likely greatest impact at short end of curve -> best strategy likely to be spot short-dated VS.

Whilst it is important to consider the likely time of arrival of any spike and the effect such a spike is likely to have on the variance term structure, the behaviour of volatility, both implied and realised, after a spike is also an important consideration.

Our analysis of spikes (in realised volatility) on major indices since the 1950’s suggests the following results:

That is, short-lived spikes tend to subside to pre-spike levels within 2 months.

Given that we can make an assumption on the likely timing of a spike and have a reasonable idea, from PCA, on how it will affect the curve, we can estimate the likely P&L from holding different maturity variance swaps. We can then gauge which variance swap offers the best cost/benefit profile given the prevailing variance term structure. 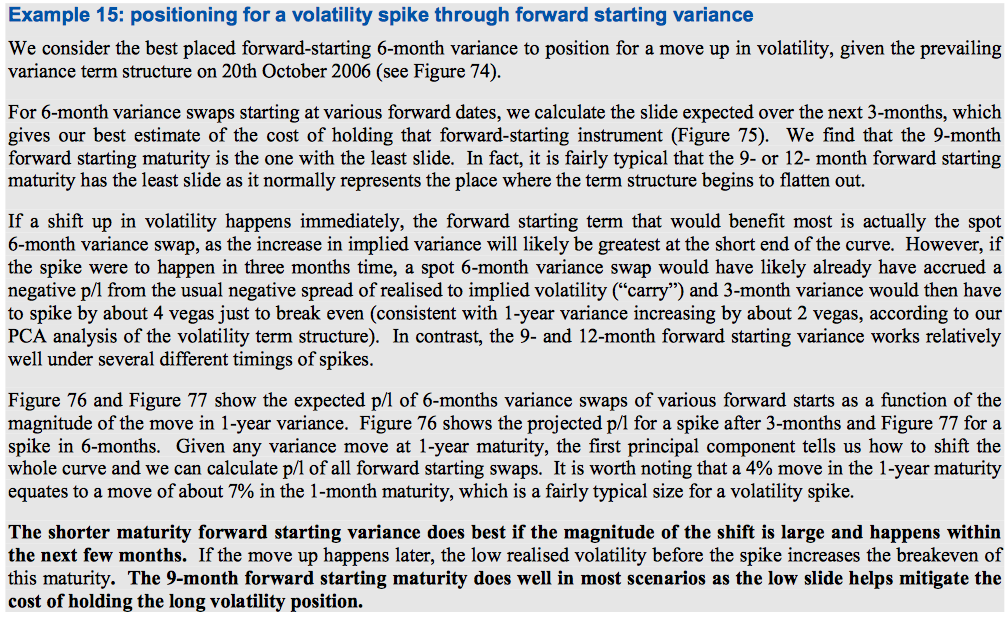 Thus for investors expecting a rise in volatility even within the next few months, the forward starting maturities can be a better place to position for this than the spot maturities. Moreover, the forward starting maturities can provide some cushion against the precise timing of any spike, which by their very nature are difficult to predict. Note though that entering and exiting a forward-starting variance swap can be more costly than running a spot variance swap to maturity, because the forward has to be traded twice and because it has a (slightly) wider bid-offer spreads.