Options Path-dependency: Can Volatility be captured by delta-hedging?

Suppose a market-maker buys and delta-hedges a vanilla option.

Assume that whatever volatility is realised is constant and option is delta-hedged over infinitesimally small dt.

Then the market-maker will profit IFF RV > IV at which the option was purchased.

1. Magnitude P&L depends not only on RV-IV, but where that volatility is realised in relation to the option strike.

If underlying trades near strike, especially close to expiry (high gamma) --> absolute value of P&L will be larger.

For non-constant vol --> possible to buy and delta-hedge an option at an IV < subsequent RV and lose from delta-hedging!

Initially, the option made a loss due to low RV, but it was kept small by low gamma exposure far from strike.

As index sold off, gamma increased, volatility picked up and option ended up making a large profit.

Initially, the option has a higher gamma and lost more due to lower RV.

As index sold off and volatility occured, delta-hedging failed to capitalise on it because very low gamma far from strike.

--> loss despite the fact the option was purchased at an IV 10% below subsequent RV.

When delta-hedging daily an option:

- magnitude of contribution of this daily accrual is weighted by current

which is unpredictable since path-dependent.

The non-constancy of exposure to (RV2 - IV2) comes from the

changing over lifetime of option. 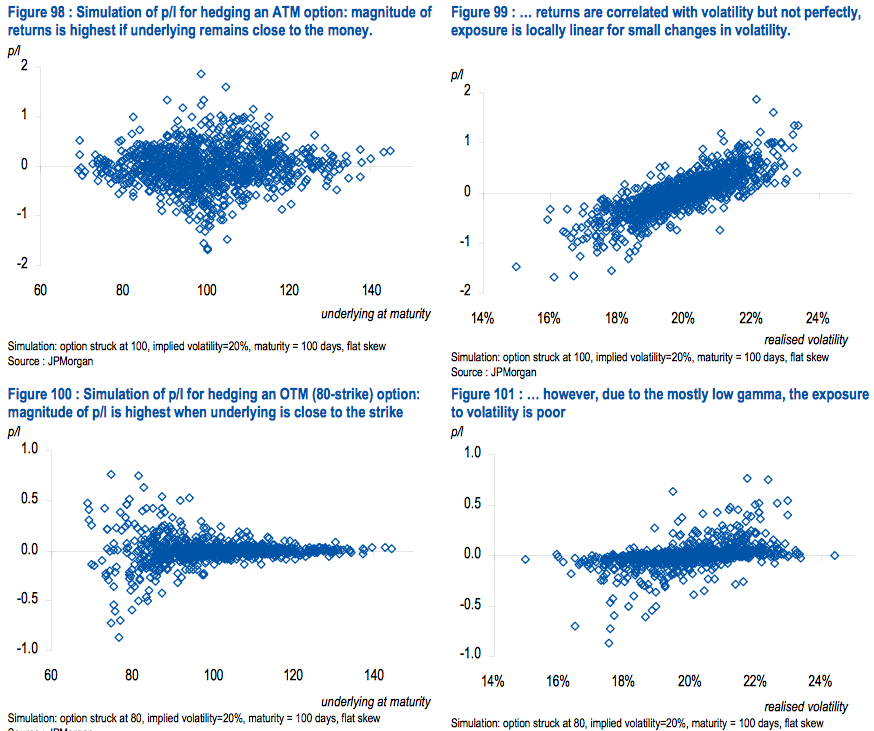 If there was such an instrument where the dollar gamma remained constant both over time and for changes in the underlying, then the exposure to volatility would be constant.