The need to understand the vega only became important after trading options became as liquid as it is today.

If you are wrong on your volatility estimate, you will only fully see the extent of this after all hedging has been completed and the option expired.

There are now 3 parameters in the picture, adding

to S and t. We can expand the Taylor series:

For all the other Greeks, we established expressions within the BS model.

It seems ridiculous to specify the model for the vega as the volatility and the BS model are almost one and the same.

Without BS model there would be no

It will become clear that the parameter

can be different for every quoted option.

It gets adjusted in the market, leading to the concept of the IV surface.

In practice, it means that there is not one such parameter for a certain stock, but a whole matrix

For a volatility or option trader, it is common practice to specify the bid/offer spread on such an option in terms of the vega.

Depending on the liquidity in the underlying, the volume of the transaction, the risk appetite and so on, he will take as a margin a multiple of the vega.

- is the sensitivity of the option price to a movement in the volatility of the underlying.

- positive for both calls and puts.

In the BS model, vega is given by:

When ATM  --> a change in the volatility can send the option either ITM or OTM thus the large effect on the price.

The vega sensitivity becomes really small when the option is either far ITM or far OTM.

Far ITM/OTM options have already picked their direction in a way.

A larger volatility won't make that much difference to the price of the option.

These kinds of options are quite easy to hedge, at least to the extent that when the market stays in the same regime, the hedge adjustments are minor over the lifetime of the option. 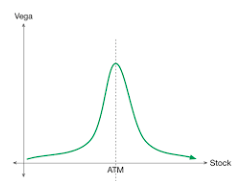 Of course there is a turning point, where the impact becomes stronger again.

Mathematically speaking this inflection point is defined as:

As soon as volatility is above this level, one could say the vega becomes meaningful, or the option is ATM from a vega point of perspective, which indeed sounds like a reasonable level.

The shape of the curve is very similar to the shape of the normal density function, but within the expression of vega, there is an extra S factor that gives a twitch of bias.

This points to the fact that in highly volatile markets the ATM point is less defined.

The ATM region has become bigger.

Higher volatility does not necessarily mean higher vega in the ATM point.

--> vega does not depend strongly on the level of vol used, at least not once a certain critical level of vol is reached.

We know that options loses their time value as time passes and we approach the expiry.

It is not surprising that the volatility sensitivity or vega dies out.

Vega/Gamma have the same qualitative behaviour: largest ATM vs ITM/OTM.

However, they have opposite dynamic behaviour: Gamma spikes towards maturity whereas Vega dies out.

If we want to capture:

When the option is away from the strike levels --> vega drops very quickly with time.

Only ATM options can hold their vega for a longer time.

For more exotic structures, the Vega profile, like the Gamma profile, can change sign, and whether we are short or long volatility depends on the underlying’s price.

The ATM option is almost linear in volatility. The prices of the ITM and OTM options are convex in volatility up to a certain level then become linear for large volatilities.

The ATM and ITM options are not worth zero when volatility is zero. In the case of the ATM, even if volatility were zero, the forward is not null and the call option still has a value of approximately r × T.