The buying or selling of a derivative creates a position with various sources of risk, some of which may be unwanted risk.

When a bank sells a derivative to a client, it should understand all the risks and hedge its position accordingly.

Once a sale is done, the product is added to an existing book of options, and it is this book that must be risk managed.

To see where the risks lie, traders will need to know the sensitivity of the option to the parameters that impact its value.

The sensitivities of an option’s price are commonly referred to as the Greeks.

To understand the concept of sensitivity we must first mention the Taylor series.

Any function can be approximated by a polynomial function.

The coefficients for this polynomial are determined by the derivatives at a single point (the current market conditions).

In general, the approximation gets better as we add more terms to it.

This simply gives us the various orders of sensitivities.

A first order approximation means that we are approximating the option price with a straight line.

The second order approximation means we are using a parabolic shape.

The linear approximation for an option is always below the price graph due to the convexity of the option price.

The parabolic approximation is almost undistinguishable unless we move substantially from the initial level.

To obtain the price of an exotic derivative, one is more often than not forced to use some model.

One must understand the implications of any model, and the impact of the its assumptions on the hedge ratios it generates.

If the model is wrong, then the hedge ratios computed using this model will typically also be wrong.

In some cases, an exotic product may have all its CFs aligned with those of liquidly traded derivatives.

It can thus be hedged by taking the opposite position in such derivatives at the onset of the contract --> Static Hedge.

Static hedge = once it is put into place initially --> no need for further hedging irrespective of how the market moves.

In this case, the hedge is model independent: the cost/price of the derivative is the cost of its hedge.

--> we do not need any model, just market prices.

The existence of a static hedge provide us with both a price and a hedge.

In the general case of exotic structures, such a hedge is not possible and a dynamic hedge must be put in use.

Once such a hedge is in place, it is sensitive to movements in the market and must be modified to still be a hedge.

How often hedges should be adjusted is dependent on the nature of the sensitivity and its impact on the price.

The day 1 hedge may consist of:

- a static part that needs no further adjustment

We will present the following Greeks in this chapter:

We will see why these greeks are relevant and how they do their job.

We will see their features and behaviours when new market conditions develop.

The important lesson is that all the conclusions can easily be drawn by understanding the time value of an option.

This by itself will turn out to be enough to qualitatively understand the behaviour of the Greeks.

The quantitative understanding requires the expressions provided by the model.

From the figure below, we can read off the value of the call option as a function of S at different times to maturity.

A lot can be learned by from this figure, when analysing the Greeks, we will often come back to this kind of plot.

One can see that the larger the maturity, the more smooth the curve looks.

As we move through time, we will be going from the smooth curve to the payout profile functions (intrinsic value).

Mathematically, there is a singularity in this profile in the strike point, because you change from one refime to another.

This singularity becomes visible when we move closer and closer to the maturity date. 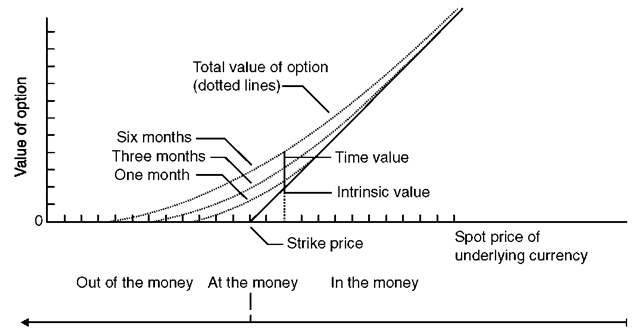