A concept that is very simple and intricate at the same time is the concept of time value.

At first sight, one might assume that this has to be a positive number.

So we might be tempting to assume this differential is always positive.

However, we will see that there are situations where the time value is negative, although most often it is positive.

For non-dividend paying stocks, the time value is always positive (unless IR < 0, which we will exclude).

This is why there is no difference in premium between American/European calls in absence of dividends.

Before moving to the put option, we will prove the positive attitude of the time on a call option.

OTM case is trivial since premium always positive and hence always more than the intrinsic value being worthless.

Suppose we own ITM European call and want to lock the intrinsic value S0 - K.

We can do it by selling forward the stock. This freezes the price risk we have.

For positive IRs, this outcome is always bigger than the IV: S(t0) - K.

We see that holding the option and hedging it by forward selling the stock gives a total value above the intrinsic value.

Clearly, this means that the cost of this hedge needs to be above this final guaranteed outcome -->

We can wonder why this argument does not hold for put options. It looks reasonable to do the same thing.

For hedging ITM put, we need to buy forward the stock.

Following the same lines of thought, we can show that the premium should be bigger than the forward IV:

, it becomes possible that the premium is less than the IV.

So the situations where the time value is negative can be traced back to the CFs.

Receiving money now or receiving the same amount of money in the future is not the same.

And the direction of the CFs in case of the put option are reversed.

The whole construction is a nice example of proxy hedging the option.

However, the outcome of the hedging strategy is unsure. We had inequalities rather than equalities.

The reason for the residual risk has to do with the fundamental aspect of options.

We started by saying that the option was ITM and hedging accordingly.

If then, afterwards, it turns out to be OTM, there arises a risk/uncertainty in the value the hedge will produce.

The balance between the option and the hedge is broken at that time. 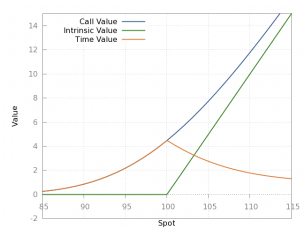 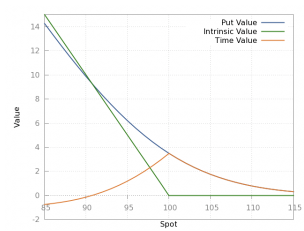